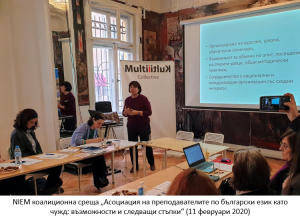 Within the Constituent Assembly, the Executive Board, and the Chairperson – the Associated Professor  Galina Kurteva from New Bulgarian University, were elected.

The idea for the establishment of such association was born during the coalition meetings on the Bulgarian language training of refugees organized within the implementation of the National Integration Evaluation Mechanism Project (NIEM), where the Bulgarian Refugee Council on Refugees and Migrants and Multi Kulti are national partners. The establishment of the Association of Teachers of Bulgarian as a Foreign Language is an important step towards the development and strengthening of the capacity of civil society structures in the field of integration of refugees and migrants in Bulgaria.