The United Nations Children’s Fund (UNICEF) and the United Nations High Commissioner for Refugees (UNHCR) in Bulgaria, in partnership and kindly hosted by the Bulgarian Red Cross (BRC), with the assistance of the Bulgarian Helsinki Committee (BHC), the Council of Refugee Women in Bulgaria (CRWB) and representatives of the refugee community, opened the Center for Refugee Support “Blue Dot” (Blue Dot). It is located at the BRC headquarters in Sofia and was opened in the presence of Deputy Prime Minister Kalina Konstantinova.

Blue Dot centers are safe areas of protection and basic services that are being opened in countries hosting refugees from Ukraine, including Poland, Romania and Moldova. They provide information, legal advice, psychosocial support, identification and referral to services for children, women, families, and other groups at particular increased risk while fleeing the conflict in Ukraine. Blue Dot Centers increase support from national governments and are organized in coordination with government authorities and other partners on key transit routes and destinations to help children and families in need. 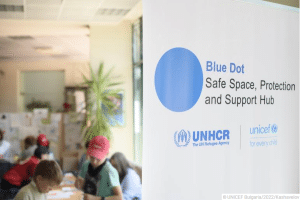 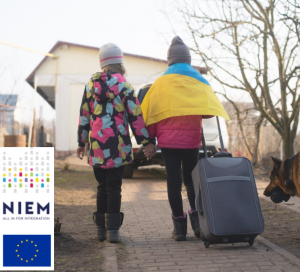 Sofia, 28 April 2022 — While the welcoming response to Ukrainian refugees marks a turning point in many EU member states’ openness to displaced persons, in particular for those neighbouring Ukraine, a recent comparative report reveals that many countries are poorly prepared in terms of their long-term refugee integration policy frameworks.

The report, published by the National Integration Evaluation Mechanism (NIEM)—which monitors and measures refugee integration policies in 14 EU Member States—highlights large gaps between countries and their policies in areas such as education, employment and housing (among others).

Of course, the temporary protection regime in place for people fleeing Ukraine has its own set of legal conditions for integration, but many indicators included in the research refer to the wider integration infrastructure in place and on whether governments pursue a comprehensive strategy for the inclusion of refugees.

“The report marks a stagnation—and in some cases even backsliding—of refugee integration policy frameworks in several EU member states over the past two years. Importantly, the report provides a roadmap to these countries, including those that are hosting large numbers of Ukrainian refugees, in terms of specific steps they can take to implement more inclusive policies that will better integrate new refugees into their societies.”—Alexander Wolffhardt, Deputy Director of the Migration Policy Group and co-author of the report.

The report also identifies a correlation between countries with more inclusive integration policies and the wellbeing of refugees during the COVID-19 pandemic, in addition to several other findings.

Summary of key findings of the report:

The full report can be accessed here.

Notes to the editors:

The Liaison Office of the European Parliament in Bulgaria is organizing a discussion on “The Road to Ukrainian Refugees in Europe and in Bulgaria”, which will be held on Friday, April 29, 2022, from 11.00 to 13.00.

The aim of the discussion “The Road to Ukrainian Refugees in Europe and in Bulgaria” is to discuss the main challenges posed by the huge wave of refugees from Ukraine across Europe, as well as short- and medium-term solutions. The event will take place in three parts. In the first part, we will discuss European policies and instruments in support of Ukrainian refugees, highlighting some of the good practices and outlining possible approaches to refugees in different scenarios for the development of the conflict. In the second part of the event, attention will be focused on the problems of Ukrainian refugees and the organizations that help them, at the national and local levels. In the third part, we will discuss what has been achieved so far in the regulatory framework in the service of refugees and the challenges facing institutions to meet the needs of refugees in access to social support, health care, work, shelter and education.

The discussion will be opened by Teodor Stoychev, Head of the Liaison Office of the European Parliament in Bulgaria and Kalina Konstantinova, Deputy Prime Minister for Effective Governance. The first part of the event will include MEP Elena Yoncheva  and the representative of the UN High Commissioner for Refugees for Bulgaria Narasimha Rao.

The participants in the second panel are Olena Shopova, activist of the Association of Ukrainian Organizations in Bulgaria “Mother Ukraine”, Dr. Nadezhda Todorovska, Deputy Director General of the Bulgarian Red Cross and Kina Sabeva, Chairperson of the Bulgarian Council on Refugees and Migrants (BSBM). . In the third panel we will discuss the challenges facing the institutions with Andrey Novakov, Member of the European Parliament (EPP), Valeri Rachev, Head of the National Crisis Staff, Stoyan Temelakiev, Deputy Minister of Interior and Mariana Tosheva, Chair of the State Refugee Agency. The moderator will be Nadezhda Tsekulova, Campaign and Communications Program Director of the Bulgarian Helsinki Committee.

The event will be held in Bulgarian, with simultaneous translation from / into English and Ukrainian for those present in the hall and the audience in zoom. All other viewers will be able to follow the live broadcast on the page of the EP Bureau in Bulgaria on Facebook and on the YouTube channel, only in Bulgarian. Sign language interpretation will also be provided for the hearing impaired.

If you want to join the event in zoom, you can register until April 28, 2022 at the following link.

You can send your questions to the participants in advance in a slido with the hashtag #UKR. During the discussion, questions will be asked during the chat in zoom or through comments on the broadcast on Facebook and YouTube.

Micro website with information for refugee from Ukraine in Bulgaria

The micro website www.ukraine.refugee.bg provides information for refugees from Ukraine on the issues of temporary protection and integration in Bulgaria  in Ukrainian, Bulgaria and English language.

On March 22 and 23, the Bulgarian Council on Refugees and Migrants hosted an international partnership meeting on the Refu’In project – Innovative tools for integration of refugees.

During the meeting, participants outlined the next steps in developing innovative tools for refugee inclusion, the role of good practices, and partnerships between stakeholders as a basis for building innovation for effective integration of refugees. The participants addressed the challenges for the integration of refugees in the context of the COVID-19 pandemic, the war in Ukraine, and the growing number of refugees.

The Refu’In project for developing innovative tools for the integration of refugees – is funded by the Erasmus + program and is part of the strategic efforts of partner organizations to build capacity to work with refugees and displaced persons. 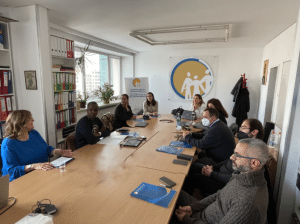 No road taxes, tolls and vignettes for people running from the war in Ukraine

All types of vehicles in the Republic of Ukraine are exempt from tolls – electronic vignette and toll, when using the national road network in Bulgaria.

From the payment of vignette fee and toll fee, regardless of its category and technical characteristics, are exempt road vehicles of Ukraine as follows:

The period in which the measure for exemption from tolls will be in force is from February 24, 2022 until the need for humanitarian and medical assistance is eliminated.

Information for hotel owners regarding accommodation of displaced persons from Ukraine

The announcement below concerns hotel owners and operators that would like to apply for humanitarian aid program for financing full-board accommodation of displaced persons from Ukraine.

According to Council of Ministers Decision № 145 from 10.03.2022, hotel owners and operators wishing to accommodate displaced persons from Ukraine shall apply to join the Program by following a couple of simple steps:

Who can apply for temporary protection?

How long does the process take?

What rights does temporary protection give me?

Where can I issue a document for temporary protection?

On the map below, you will be able to see all of the active places in Bulgaria where, you can apply and get a document for temporary protection, and find the closes one to you. The map is updated constantly with new places.

Since 15th of March 2022 the Bulgarian government started to roll-out a new system for registration for temporary protection of people displaced from Ukraine. New locations will be made available every day, along with the ongoing training of additional staff and deployment of new equipment. The prioritization of the roll-out is based on the number of displaced people from Ukraine currently accommodated in different places across the country, as well as on the statistics for the “hot spots” at border-crossing points and railway stations. The map below will be updated on a daily basis to reflect the roll-out of all new registration offices for temporary protection.

The registration offices are featured  in the BCRM Mapping System.

We present to your attention the latest AIDA (Asylum Information Database) country report on Bulgaria, which provides a detailed overview on legislative and practice-related developments in asylum procedures, reception conditions, detention of asylum seekers and content of international protection in 2021.

On 11 March, the Bulgarian Council on Refugees and Migrants, the Multi Culti, and the UNHCR Representation in Bulgaria held a coalition meeting on the “Refugee Integration System.” Representatives of leading NGOs in the field of refugee protection and integration and local authorities with experience and expertise in refugee integration projects and agreements for the integration of beneficiaries of international protection attended the meeting.

Participants discussed the opportunities for developing a sustainable mechanism for refugee integration and the strengthening cooperation between state authorities, public institutions, and NGOs. Discussions focused on the National and European funding of the system for refugee integration and the possibilities of delegating related activities to NGOs.  The meeting focused on the link between the initial adaptation of asylum seekers and the subsequent comprehensive integration measures after granting protection.   Participants discussed the challenges related to the reception of refugees from Ukraine and the specificities related to the granting of international protection or temporary protection. 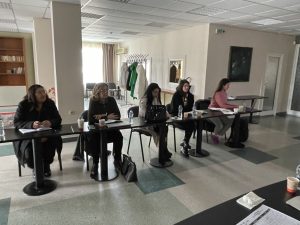 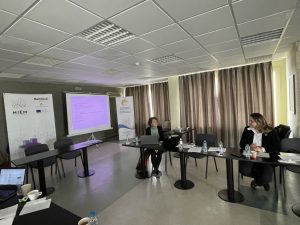 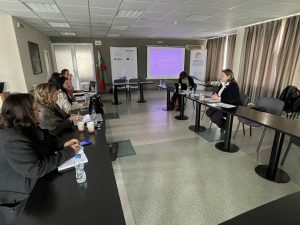